As a writer your job is to make choices and WRITE THEM DOWN!

Until you write them down you’re thinking, not writing. You become a writer when you make the trip from your head to the page. It’s a short trip, but a scary one.

You can’t try to make the trip, you leap! When you leap, you are writing!

Wasn't that fun? Now you can look back and read it. Because the truth about writing is that while it's usually not as bad as you feared, it also usually needs a rewrite. But don’t rewrite while you’re leaping – you'll fall.

TRIES – Here's a trick that will strengthen your writing without even "trying".

Look over your outline or action descriptions; do you have a character "trying" to do things? For Example: Jen tries to get in the apartment. DO THIS: Take out the word "tries" and go for it – have your character DO whatever it is you described her as "trying" to do. For Example: Jen sticks the key in the lock and it breaks off in her hand. Even a simple, Jen turns the doorknob, it’s locked, is better. And now that she's done something, you can go on and write the next thing your character does. She kicks the door and screams obscenities. She slides down the door in a heap on the floor and cries.

Here's another example. Say you wrote: Brad tries to get money from his mom. Take out "tries" and write what he does: Brad offers to clean the bathroom for $20. Or, if he's more rebellious: Brad steals $20 from his mom's purse. You see? What your character does can be photographed, and we, the audience/reader can see it too. What he "tries to do" is vague – there's no image of him in action yet, it can't be photographed. Cut "tries" and have him do it.

BONUS: STARTS – Use the same trick – take "starts" out of your descriptions. Your character doesn't 'start' cooking, he throws bacon on the grill; she doesn’t 'start' up the stairs, she trudges to the first landing and collapses. Of course, there are exceptions – a character can 'start' the car, as in The Godfather, when the beautiful Apollonia, Michael's (Al Pacino) sweetheart in Sicily, turns the key in the ignition and it blows up, killing her. If you've got something that full of action and story consequence, okay – otherwise, don't 'start' the action, DO the action.

If you use these tricks in your outline I guarantee when you write the scene with dialogue and action it will be more effective for a visual medium and a more exciting read for your reader.

QUIRKY – Have you described a character(s) as "quirky"? Okay, now you need to go back, and go on. Quirky is shorthand; a placeholder. What is it that makes your character "quirky?" How is she quirky? What does she do that would make someone think she’s quirky? Shorthand is okay for someone else to evaluate your character, but your job as the writer is to create the "quirkiness." To do that, you define it. That’s creating a character. And that, my dear sweet creative soul, is you being a writer.

"...when you're writing a television series. You have to write when you're not writing well. I wrote 88 episodes of The West Wing. One of them is going to be your 88th best. And I'm not good enough for my 88th best to be very good." Aaron Sorkin

I make a pumpkin cheesecake every Thanksgiving (which I have to say, is pretty great) and a friend asked if I’d make it for the dessert table at his wedding – flattery will get you everywhere. So I said “For your wedding?! Sure, I’d be honored.” If you’d like to download the whole story and the recipe, click here.

Tweets by @sandlerink
Schedule of Events 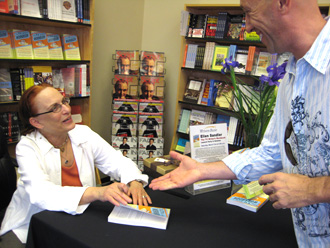 Ellen's book signing at The Writer's Store in Los Angeles